In my last blog text I promised to get back soon. So here I am a bit over one and half years later. No excuses I just have been lazy.

Let’s go back to the July 2015. My girlfriend and I were on our yearly summer holiday trip. This time we chose to travel to the Balkans. Our flight landed to Dubrovnik Croatia but we swooped cross the border to Montenegro as soon as possible. We ended up to the town of Bar at afternoon.

Like very often on holiday trips my alarm clock was ringing at four a clock. I walked to the place I had checked last night and started to fish. It didn’t take too long to catch my first Montenegrin fish. It was a new species and my all times species number 200!
Later I caught couple of more Rock gobies, a Bucchich's goby and one Damselfish. I spent lot of time trying to catch some Morays cruising literally under my feet. Sadly I didn’t have the right equipments with me this time. I hooked a moray six times and lost them all.
Bit gutted I headed back to our apartment to pack my stuff. Few hours, couple of taxi rides and one border crossing later we arrived to our hotel at the city of Skadar in Albania.

Our hotel had some free bikes to borrow. Next morning I hopped on one of them and pedaled about two kilometers to the banks of River Buna. I caught a fish right on my first cast. First I thought it was a European chub but later I find out it was a new species as it turned out to be Skadar lake chub (Squalius platyceps). I also caught two more new species in the forms of Gjuca and Eastern mosquitofish. Few Roach took my bait too. I think they were Rutilus rutilus but there is several species from the genus Rutilus in the Skadar Lake area.  I still have to find someone who could  help me with these Roach.


On the fourth day of our trip we decided to have a beach day (day before we visited the capital of Albania, Tirana). For me it means fishing! We took a furgon (Albanian minibus) to the village of Velipoje at the coast. The beach didn’t look good for fishing so I took a hike and walked east till I arrived to the Vilun lagoon. I saw a local fisherman catching some small Gilthead bream every now and then and  took a place quite close to him. I started with small sabikis baited with dryed worms. I had several bites right on my first cast and finally I managed to hook a fish. It was a Gilthead bream not bigger than my palm but it was a new species for me. After that I made tens and tens of casts and changed places couple of times too but the fish of the first cast remained the only fish of the day. 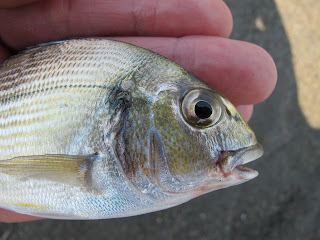 It was time to get back to Montenegro again. We took a bus from Shkodra to Ulcinj and another one from there to Petrovac. Later in the evening I was checking the fishing possibilities of the Petrovac harbour for the next morning. It was a nice little harbour with plenty of fish in it. First I caught several Bucchich's gobies but then I spotted couple of interesting looking creatures at the bottom of the dock. The first one took my mormushka right away and turned out to be Black scorpionfish. Then it was time to catch the other little critter. I wasn’t hard either and soon I was photographing my second new species of the day. Not bad for a short morning session like this. It was a short one night stop at Petrovac and so we headed to the airport of Tivat to pick up our rental car.

The next destination was at the mountains of Montenegro. We drove with our small Skoda in the awesome scenery until we found a nice little mountain village called Kolasin. I did not go fishing there even though the mighty Tara river was flowing right next the village. Day number seven of our trip dawned and we turned our car towards a yet new country. Couple of hours and a minor hassle with the Montenegrin border officials later we crossed the border of the Republic of Kosovo.


I jump right to the moment we were about to cross the border again. I had almost given up that I could add a new country also to my fishing lists when I saw a nice place by the lake shore just about one kilometer before the Albanian border.  Actually it was not a lake it was a wider part of the Drin river. Saddly my worms had made a mass suicide day before and the only baits I had was few slices of bread and some Power Bait worms. There was tens and tens of small minnow like fishes cruising near the shoreline but they totally ignored my offerings . I also saw couple of Bleaks but failed to catch them too. So Kosovo became the first and hopefully the last country I’ve been fishing at without catching a single fish. After that we took a ride back to the Montenegro and ended to the very busy town called Buljarica.

Because the shoreline of Buljarica is nothing than sandy beach I decided to take a ride back to the first mornings spot at Bar. This time I was prepared to take a rematch with the Morays. I saw a tiny little fish on the rock and gave it a try with my tanago hook. Seconds later I had what I think is a Mystery blenny on my hand.

Like on the first try one week earlier the Morays gave me six tries again. This time I had tied a strong number 8 hook straight to the end of 0,35mm fluorocarbon line and was hand lining with it every time I spotted a Moray between the rocks in front of me. And finally the sixth time’s a charm. After a furious fight I landed my first ever Moray species. It was a nice fish over a half a meter long but saddly it escaped before I managed to get a picture of it. Oh well, that only means I’ll have to catch another one someday.

Later on the same day we had drove back to the city of Tivat. We had one more day and night to spend before we had to drop our rental car back to the airport. So at the afternoon I dropped my girlfriend to the beach and went fishing again. I found a school of ferocious little fish and after a strike number 47 or something I finally hook a fish. That was a Five-spotted Wrasse and a new species. After couple of more wrasse and seabream I decided to take a look what was swimming at my spot. By snorkeling I saw some Peacock blennies, Giant gobies and couple of more species I’ve never caught by hook and line. Bugger, they’re there and I can’t catch them….

After a good nights sleep we took our Skoda back to the Tivat airport and headed to the bus station. Couple of hours later we arrived back to Croatia. From Dubrovnik we took a local bus to a nice little village called Cavtat.

Cavtat is founded on the small rocky peninsula and has nice shoreline to fish from. But make sure you are there early in the morning before the sunbathers conquer all the places. And so I did. I was at the shore while it was still dark. Loyal to my style I took my microfishing gears and started to light the water with my head torch. Soon I spotted a tiny little fish which was easy to lure up. It was my second Mystery blenny of the trip. Some fifteen minutes later I saw something very interesting. Happily this fish was also very cooperative and I managed to catch it. Red-black triplefin was the english name of the fish. I caught two more tiny blennies. The first one was what I think another Mystery blenny but the second one was yet a new species. One Bucchich's goby and one Madeira rockfish later it was time to head back to our apartment.

Later on the morning I made the last fishing session of the holiday. I caught three tiny gobies which still needs to be identified and also one blenny which is unsure by its species too. And of course I had to tease myself by snorkeling a bit. Once again there was few Peacock blennies, one Giant goby, a school of small barracudas and some other irritating creatures lurking right at my swim.


At the end it was awesome holiday in the great countries. I added two more countries to my fishing lists. Kosovo was the first country I’ve been fishing at without catching even one single fish. Therefore I can’t add it to my list. What it comes to specieshunting I caught twelve new species and there is still few species to be identified….

They are following my blog

Me, myself and I